This website uses cookies to enable personalized navigation, to use the shopping cart and to measure the site’s audience.
If you do not want cookies to be used, you can disable them in your browser settings. 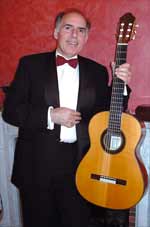 Born in Geneva, he discovered the guitar thanks to the likes of Robert Hisland and José Barrense Diaz. He completed his brilliant studies in Michel Rutscho’s class by benefiting from the teaching of Konrad Ragossnig and Dante Brenna. He also attended the Masterclasses of Oscar Cacères and the Master Andrès Segovia.

He regularly gives concerts in Switzerland and abroad, as a soloist or with different chamber music orchestras. Claude Chappuis has recorded for the radio (RSI) and the Télévision Suisse Romande, the official channel of French-speaking Switzerland. He has also recorded and played several works by Swiss composers, sometimes performing them for the first time. In 1993 he recorded the CD Blasons des fleurs with Elisabeth Mattman, soprano. It was mainly devoted to Spanish composers and included a work by the Swiss composer
J.-Fr. Zbinden (first recording worldwide).

Critics are full of praise, speaking of his refined technique, musical sensibility and warm interpretation in enthusiastic terms. A renowned professor himself, he has trained numerous guitar professors. Currently he teaches at the Conservatoire de Berne and the Haute école pédagogique HEP-BEJUNE.

His passion for pedagogy and didactic methods has led him to edit works for students and to create, in 1999, the Editions PARTITA.